FATHER Project Site Development Manual. I set-up this online manual for the FATHER Project, as a resource for the expansion and replication of their program for low-income fathers.

Minneapolis Police/Community Conflict. In a Conflict Resolution class at the University of St. Thomas, I co-taught a case-study about police/community conflict in Minneapolis.  A group of students in that class wrote a detailed paper about the topic.

Meeting Victims’ Needs Post-Conviction: I coordinated a study group that wrote this report about how agencies in Minnesota could more fully address the needs of crime victims.

North Minneapolis Places We Love: This is a photo project from an inner-city neighborhood where I used to live.

Friends in El Salvador: Photos and notes from a trip I took to El Salvador as a representative of Northern Yearly Meeting. (added 1/11/02)

Releasing the Core Gift of Quakerism, An article envisioning the future of Quakerism for Spark, a publication of New York Yearly Meeting. 2011.

An interview project with people who work with conflict about the spiritual foundation of their work.  Nifty photomontages too. (added 11/28/00)

Friends for Non-Violent Diversity: A Case Study of One Peace and Justice Organization’s Efforts to Become More Multicultural: In this paper, I look at how the organization I used to work for, Friends for a Non-Violent World, approaches diversity, multiculturalism, and oppression. (added 8/11/01) 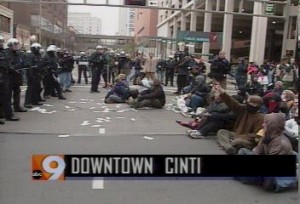 How I Believe Change Happens: Noncooperation With Evil Systems, Cooperation with God. This is an essay based on my experience helping with trainings for protestors in Cincinnati, Nov. 2000.  I talk about how I believe social change happens, drawing from my experiences in Cincinnati and from George Lakey’s writing.(added 12/7/00)

Standing Still: The Arrest
Resistance is the Secret of Joy: The Trial These two essays are based upon my experience with civil disobedience and the trail that followed.  I was protesting the production of landmines.